» ipddl.com » Books » Eyewitness Korea The Experience of British and American Soldiers in the Korean War, 1950-1953

Eyewitness Korea The Experience of British and American Soldiers in the Korean War, 1950-1953 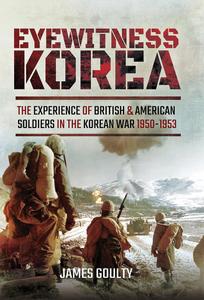 Today the Korean War of 1950-1953 is overshadowed by later twentieth-century conflicts in Vietnam and the Middle East, yet at the time it was the focus of international attention.


It threatened to lead to a third world war, and although fought on a limited scale, it still involved over a million men under UN command and even more on the Communist side. It left the American and British troops who took part with a range of intense recollections that often marked them for the rest of their lives, and it is these experiences that James Goulty draws on in this eyewitness history of the conflict.
He uses official documents, letters, diaries, regimental histories, memoirs, oral histories and correspondence to show what the war was like for those who took part. Their accounts vividly contrast the American and British experience as seen through the eyes of individual servicemen, and they throw fresh light on the relations between the UN forces on their different attitudes, tactics, training and equipment, and on the tensions that developed between them.
Download link :
(If you need these, buy and download immediately before they are delete)
Rapidgator.net: