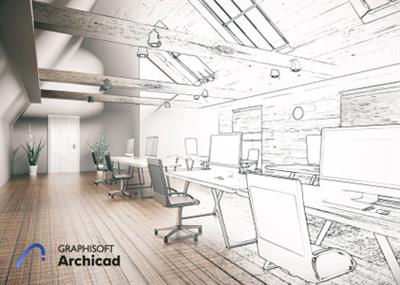 GRAPHISOFT, the leading Building Information Modeling (BIM) software solution for architecture, has released Archicad 24 Update 6004. This update aligns with GRAPHISOFT's new approach to releasing continuous quality and feature improvements within version cycles, making it easy for existing users to upgrade and benefit from the latest capabilities right away - even mid-project.

This Update contains various enhancements and fixes since the release of Archicad 24 Update 5004.


DEF-2106 FILE/IFC/IMPORT: IFC 3D curves were not imported correctly.
DEF-2029 MODEL: Railing list values, for instance Top Elevation, Bottom Elevation were incorrectly calculated.
DEF-3580 FILE/IFC/IMPORT: A Tekla structure with extrusions clipped with another extrusion when imported to Archicad via IFC transfer led to misplaced walls and other elements.
DEF-2518 FILE/CRASH/OPEN: Archicad v21 or older projects with certain category data crashed Archicad on migration.
DEF-3620 FREEZE: A dimension line modification in the section/elevation view sometimes caused a rebuild which was followed by a freeze.
DEF-3105 HELP: Archicad Help and '?' help icon in multiple object settings dialogs defaulted to offline help.
DEF-2140 FILE/IFC/EXPORT: The reference line for polygonal walls was not correctly handled when exported to IFC.
DEF-2945 BIMcloud/PUBLISH/PMK: PMK drawings hosted on a BIMcloud that were linked into a teamwork project and later re-published became inaccessible to the teamwork project until re-linked.
DEF-3973 FILE/SAF/IMPORT: SAF Model Compare detected changes, where there shouldn't have been any.
DEF-1624 FILE/C4D/EXPORT: In comparison to AC23 the export to Cinema4D was significantly slower due to changes in the beam and column tool.
DEF-1533 DOCUMENT: The view of a schedule with a "Leading" value set, no matter what its value was set to, always displayed the leading value as a 100 on layout.
DEF-2989 UPDATE: Help/Check for Updates did not by default place focus on the tab that provides Archicad update information.
DEF-2928 MODEL/PERFORMANCE: Complex profile handling had unnecessary operations that adversely affected memory use and performance.
DEF-2564 FILE/PDF/EXPORT: Linear gradient fills that were rotated, as can happen with plan orientation, exported incorrectly to PDF.
DEF-3742 CRASH: Archicad Start Edition crashed when opening the context menu of any opened tab.
DEF-3521 MODEL: A custom corner of a window placed opposite of the wall's reference line caused the window to flicker.
DEF-2350 TEAMWORK: An otherwise viable stair with an inconsistent part prevented a project from being shared in Teamwork.
DEF-3727 CRASH: Mapping a new building material in the SAF export translator crashed Archicad.
DEF-2647 PERFORMANCE: The recalculation of dimension positions connected to openings caused a delay when switching between floor plans.
DEF-1982 EDIT/MODEL: The orientation of a railing's sub-elements could change after the railing was mirrored.
DEF-1586 FILE/DWG/EXPORT: Missing Xref references prevented the export of views as DWG.
DEF-1514 MODEL: The surface of holes in a slab was not subtracted from the slab's area.
DEF-4160 USER INTERFACE: Show area text checkbox did not work or was very slow.
DEF-2671 CRASH: Archicad crashed due to corrupted rendering scenes.
DEF-931 DOCUMENT: Changing renovation filters resulted in missing annotations in schedules.
DEF-667 CRASH: Archicad was more susceptible to crashing when its host was low on available memory.
This package contains the fixes and improvements of the previous Updates as well.
Archicad, the architects' BIM softwareof choice, offers a complete end-to-end design and documentation workflow for architectural and integrated architectural and engineering practices of any size.
TheArchicad 24introduces new integrated workflow technology aiming to enable architects and engineers to work more seamlessly and with greater transparency and also continues to build upon the collaborative features for BIM professionals found in earlier versions - but this release focuses on process and eliminating conflict and redundancy issues when architects and engineers are collaborating on the same files. Archicad 24 aims to unite architects and engineers by leveraging the shared BIMcloud environment to deliver integrated design.
BIMcloud is an environment that enables real-time collaboration between project team members and stakeholders, and can be configured to be either private or public cloud environments for fast and secure access to shared projects. For this release, BIMcloud has been upgraded with some additionally powerful features, including the ability to compare two BIM files - even if they are two versions of the same design - to visualize options or compare differences. In addition, Architects and structural engineers can now co-design the load-bearing structure of the building thanks to a powerful "BIM Track Changes" workflow.
For outside stakeholders, BIMx is the presentation and coordination app that allows for "game-like" navigation through models, helping anyone (including non-professionals or those outside of the AEC industry) a way to explore a building model or other deliverables. In the this version, the 3D engine driving BIMx has been replaced. The platform also includes Twinmotion 2020 (from Epic Games), a highly realistic architectural visualization software.
Interestingly, Archicad 24 has upped the documentation game, too, with the introduction of Phyton in Archicad 24, allowing for automation scripts that can help to automate some more manual processes. This level of customization might make integration into existing workflows more powerful for those that are looking for reliable documentation outputs in their modeling work.
ArchiCAD 24 new features and more
GRAPHISOFT empowers teamsto create great architecture, through award-winning software solutions, learning programs, and professional services for the Architecture, Engineering, and Construction industry. GRAPHISOFT is part of the Nemetschek Group.
Product:GraphiSoft ArchiCAD
Version:24 Update 6004 *
Supported Architectures:x64
Languages Supported:english
System Requirements:PC **
Size:3.4 Gb